My days of running from one ballet competition to the next have long become a thing of the past, but when I look into the eyes of young dancers I have been engaging with lately and hear their questions and concerns, I can almost see my twelve-year-old self staring back at me and relive that same anxiety. What would the next competition bring?

In Brazil, competitions are the closest one can get to feeling a bit more like a real dancer, outside the everyday studio practice. It is the only way to come face to face with an audience, to acquire stage experience and learn all the physical and psychological nuances of being a performing artist.

For me, this all culminated in one single, most important event which still happens to this day: the YOUTH AMERICA GRAND PRIX.

I was fourteen years-old when my mom took me to New York to participate in the YAGP finals. This wasn’t like any other competition I had been to, it was an international event with hundreds of teens of all nationalities and backgrounds. I immediately felt a different energy and excitement. Back in 2003 it was fairly new and still being shaped into the renowned competition it is today. One thing I could spot quite clearly throughout the marathon of classes, rehearsals, and performances was the passion and commitment of YAGP to bringing aspiring artists together and giving them an opportunity to be nurtured, educated, and developed.

What makes a competition like YAGP stand out is its dedication to giving dancers scholarships to the best ballet schools around the world. For many young dancers, this is their only chance of building a foundation for a professional career, of being spotted by someone ‘important’ who could offer them an opportunity to study abroad in a renowned school. It is by far the safest (though never easy) way of joining a ballet company.

Most ballet schools are affiliated with professional companies where students are often referred to or guided towards a place better suited for them. They are often given opportunities to be performing with that company in big productions such as The Nutcracker, Swan Lake orThe Sleeping Beauty. This is the best introduction to what working in a company is really like, dancing in the corps de ballet, besides being a good addition to your resume if you are applying for a job elsewhere.

Young dancers often put all their hopes and prayers into winning the competitions, but receiving a medal is no indication to who will make it as a professional dancer or not. My biggest prize at YAGP - even though I was completely overwhelmed by the final results – was the doors that were opened for me through the scholarships I received. I was offered six scholarships and chose to join Canada’s National Ballet School, where I would study for four years.

At the time, I wasn’t even aware of the magnitude of the event. I had been selected for the finals from a video preliminary round (a tape my parents and I didn’t even know got sent until after we received a letter inviting me to participate in the NY finals). It was my first time competing abroad, and all I knew is that I was there representing Brazil, together with five other dancers who’d been selected from Prêmio Cecilia Kerche, organised by Stars Dance.

Despite being in a faraway city and having no one who could speak our language, what stood out for me in YAGP was the fact that all the dancers had numbers, and there were sooooooo many of us. I was number 58 (eight being my lucky number perhaps since then) out of more than seventy girls in the Junior category. I believe today the number of competitors is even higher! I soon realised another significant difference, that it wasn’t just about having two-minute take on stage to perform a variation I had assiduously rehearsed back home. There were also workshops, masterclasses, the Grand Defile, a class on stage in front of the jury.. a whole support network to ensure that you were properly seen and evaluated and ultimately performed your best.

Until the moment I arrived in the competition, I had no idea that the jury would be composed of school directors who were looking out for talented girls and boys and giving them scholarships! I had been hiding at the back of the studio, praying not to make a fool of myself in front of the other participants. But as the days went by, it dawned on me that this was silly. I was there because I had deserved it, even if I didn’t think that I was good enough.

I believed that in order to stand out at YAGP, you needed a pretty physique and technical strength (and, of course, to be flawless on stage) but I never considered that what those artistic directors might have been looking out for, especially in class, was how attentive you are, how quickly you assimilate exercises, if you can absorb corrections, if you are focused and show discipline, all those things that will make you a promising student and professional.

{"items":["9b5d60_cd05c826262b45fe9a26d58fe58ea48d~mv2.jpg","9b5d60_be3f85d9e07a4568a31fdaac89a428a0~mv2.jpg"],"styles":{"groupSize":1,"showArrows":false,"cubeImages":false,"cubeType":"fill","cubeRatio":1,"isVertical":false,"gallerySize":"300","collageDensity":0.8,"groupTypes":"1","oneRow":false,"imageMargin":10,"galleryMargin":0,"floatingImages":0,"chooseBestGroup":true,"smartCrop":false,"hasThumbnails":false,"enableScroll":true,"isGrid":false,"isSlider":false,"isColumns":false,"isSlideshow":false,"cropOnlyFill":false,"fixedColumns":0,"enableInfiniteScroll":true,"isRTL":false,"minItemSize":120,"rotatingGroupTypes":"","rotatingCubeRatio":"","gallerySliderImageRatio":1.7777777777777777,"numberOfImagesPerRow":0,"numberOfImagesPerCol":1,"groupsPerStrip":0,"borderRadius":0,"boxShadow":0,"gridStyle":0,"mobilePanorama":false,"placeGroupsLtr":false,"viewMode":"preview","thumbnailSpacings":0,"galleryThumbnailsAlignment":"none","isMasonry":true,"isAutoSlideshow":false,"slideshowLoop":false,"autoSlideshowInterval":4,"useCustomButton":false,"bottomInfoHeight":0,"titlePlacement":"SHOW_ON_HOVER","galleryHorizontalAlign":"center","galleryTextAlign":"center","galleryVerticalAlign":"center","scrollSnap":false,"itemClick":"link","fullscreen":false,"allowSocial":false,"allowDownload":false,"allowTitle":true,"allowDescription":false,"loveButton":false,"loveCounter":false,"videoPlay":"onClick","scrollAnimation":"NO_EFFECT","scrollDirection":0,"overlayAnimation":"NO_EFFECT","arrowsPosition":0,"arrowsSize":23,"watermarkOpacity":40,"watermarkSize":40,"useWatermark":true,"watermarkDock":{"top":"auto","left":"auto","right":0,"bottom":0,"transform":"translate3d(0,0,0)"},"loadMoreAmount":"all","defaultShowInfoExpand":1,"allowTitleExpand":true,"allowDescriptionExpand":true,"allowLinkExpand":true,"expandInfoPosition":0,"allowFullscreenExpand":true,"fullscreenLoop":false,"galleryAlignExpand":"left","addToCartBorderWidth":1,"addToCartButtonText":"","slideshowInfoSize":200,"playButtonForAutoSlideShow":false,"allowSlideshowCounter":false,"hoveringBehaviour":"APPEARS","thumbnailSize":120,"magicLayoutSeed":1,"imageHoverAnimation":"NO_EFFECT","calculateTextBoxHeightMode":"AUTOMATIC","calculateTextBoxWidthMode":"PERCENT","textBoxHeight":0,"textBoxWidth":200,"textBoxWidthPercent":50,"textImageSpace":10,"textBoxBorderRadius":0,"textBoxBorderWidth":0,"textsVerticalPadding":0,"textsHorizontalPadding":0,"titleDescriptionSpace":6,"customButtonText":"","customButtonBorderWidth":1,"customButtonBorderRadius":0,"loadMoreButtonText":"","loadMoreButtonBorderWidth":1,"loadMoreButtonBorderRadius":0,"imageInfoType":"NO_BACKGROUND","itemBorderWidth":0,"itemBorderRadius":0,"itemEnableShadow":false,"itemShadowBlur":20,"itemShadowDirection":135,"itemShadowSize":10,"imageLoadingMode":"BLUR","expandAnimation":"NO_EFFECT","imageQuality":90,"usmToggle":false,"usm_a":0,"usm_r":0,"usm_t":0,"videoSound":false,"videoSpeed":"1","videoLoop":true,"galleryLayout":1,"gallerySizeType":"px","gallerySizePx":"300","allowHover":true,"mobileSwipeAnimation":"NO_EFFECT","gotStyleParams":true,"showVideoPlayButton":true,"selectedLayout":"1|none|1|fill|false|0|true","layoutsVersion":2,"selectedLayoutV2":1,"isSlideshowFont":false,"externalInfoHeight":0,"externalInfoWidth":0},"container":{"galleryWidth":2580,"galleryHeight":1440,"scrollBase":0,"height":null,"width":null}}
Workshop with Susan Jaffe, former principal dancer at ABT. To my left is Daniel Deivison, who got a scholarship to San Francisco Ballet School and is a soloist with SFB today.

The classes and workshops allowed me to show what kind of dancer I really was: one always curious, hardworking, who could pick up the details and musicality and maybe just needed a bit of a push to stand at the front. They also allowed me to learn from the best dance professionals, people I truly admired.

The event would also be throwing a gala performance, ‘Stars of Today meet the Stars of Tomorrow’, which happens to this day and gives young dancers the opportunity to watch their idols up close, to interact and feel inspired by them. Nowadays, most are YAGP alumni who went on to build great careers with the most prestigious companies. In the gala, there is also the Grand Defile, where all competitors can dance together in an ensemble piece and learn how to work collectively.

I don’t remember YAGP as a highly competitive environment. I felt welcomed from the start, everyone seemed so happy to be there and open to learning and sharing that experience. I couldn’t speak much English, and perhaps that made it difficult for me to socialise, but I intentionally averted my attention from what other competitors were doing or noticing how good they were. I had prepared a warmup class with coach Toshie Kobayashi and while I waited for my turn to be on stage, I also went over all the details of my solo. I focused solely on what I came there to do: to represent my country well by performing my very best.

The event asks you to present one classical variation and one contemporary solo, a piece with music and choreography of your choice. In Brazil, this would have been called a 'neo-classical' solo, contemporary meaning something quite modern. I performed Raio de Luz, choreographed by Ivonice Satie, which luckily had been adapted for YAGP as I really struggled with Satie's contemporary moves. My friend Paulo, however, showed up on stage bare feet, sitting on the floor, rolling and unrolling, performing a beautiful solo but not exactly what the jury was expecting.

After watching his performance, the organizers of the event approached him backstage and asked if he could perform something different. The jury wanted to see him jumping and turning, something that could show off his potential. Paulo borrowed my music from Raio de Luz and went upstairs to a remote part of the theatre, this big empty space where, together with his coach Simone, they created a brand new piece. He performed it a few minutes later, improvising magnificently on stage.

I had never seen such courage! That, to me, demonstrated how determined Brazilians are. It also showed how YAGP had our best interests at heart; they’d given Paulo a second chance, knowing he would have missed the opportunity of his life on account of a misunderstanding. He went on to receive a scholarship for the Paris Opera Ballet School.

Today, Paulo Arrais is a principal with Boston Ballet

The feeling I had when performing Raio de Luz in New York never left me. The moment I entered the stage, I felt 'illuminated'. All my nerves went away. For the classical variation, I performed Petipa's Satanella. Out of more than seventy competitors, only eighteen made it to the second round.

The final day of the competition arrived and we still didn't know any results. The anticipation was real! We were told to wait outside the Alice Tully Hall for announcements of who would be performing what in that evening's gala. Five or six numbers from my category were called, one of them being number 58. That same night, I would find out I had won the Gold medal. 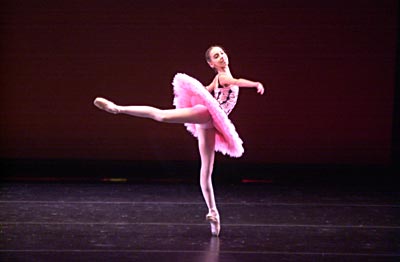 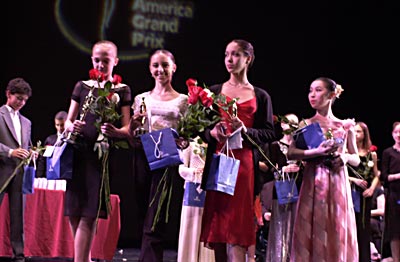 Many dancers dream of receiving a medal without realising that winning is just a bonus, not at all the most important factor. It is a reflection of how good you feel on stage, how much you can be yourself and show your potential throughout the event. But at the end of the day, the biggest price comes regardless of your classification: the experience, the memories, the lessons learned.

Youth America Grand Prix has assisted generation after generation of talented young dancers. Last year, it celebrated its 20th anniversary since being founded in 1999. Over 450 YAGP alumni are now dancing with 80 companies around the world, around 50 of them being Brazilians. I was one of the first of my generation to participate in the Finals in New York. Back then, we were treading carefully on unknown territory, but now it has become a familiar and dearest venue to the young dancers of Brazil.

I was welcomed back home with open arms and a big celebration, receiving so much love and support of friends and family. That is the best part of it all! You get this feeling that you have accomplished your mission, but in truth it meant so much more than that. I was especially pleased to see coach Toshie, who had been sending her magic vibes from afar.

'A promising future awaits you, Isabella.' - she said - 'But now, the real work begins.'

Seeing how much talent and potential there is to be nurtured in Brazil, YAGP has developed a special bond with the country over the years. Last year, the semi-finals, workshops, and masterclasses took place in the city of Sao Paulo. Watch this video to learn a bit more about it (most of it is in Portuguese).

Find out more about YAGP here.

Subscribe to the blog to receive updates on my posts. The subscription form can be found in Home Page. Thank you!